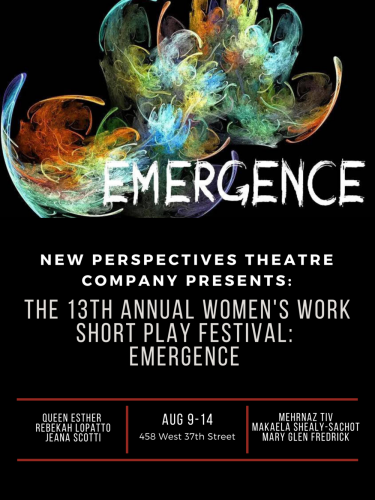 As a member of the 2021 Women's Work Short Play LAB, Queen Esther's one act play That's What Happened premieres on:

From New Perspectives Theatre Company: We are pleased to announce EMERGENCE, our 13th Annual Women's Work Short Play Festival, running Monday, August 9 to Saturday, August 14, 2021. The Festival performs in two programs on an alternating schedule of 4:00pm and 8:00pm, with a combined program on August 14th at 2pm and 5pm.

The theme of EMERGENCE was inspired by the social and political discourse percolating in the U.S. at the start of a new LAB. Each writer found her own take on this theme, and the resulting plays are as unique and diverse as the talented writers who created them. The festival is comprised of six plays in two programs.

Program A begins with That's What Happened by Queen Esther, which interweaves the experiences of an African American Capital police officer and a participant in the January 6th insurrection for a look at the two realities in contemporary America. Rebekah Lopatto's Bad Koreans is set on a college campus and farcically spotlights the dilemma of a group of young women struggling to claim their own identity in the face of cultural dictates from all sides. Jeana Scotti's absurdist Candy Girls tackles the question of workplace sexual harassment through a generational lens and the infestation of the "male gaze" in all aspects of women's lives.

Program B opens with Brittany Johnson by Mehrnaz Tiv, which looks at the ways in which the entertainment industry pigeonholes women from different cultural backgrounds, and one aspiring actor's journey to succeed in spite of the odds. Earthshine by Makaela Shealy-Sachot is a mystical fairytale set in a closed religious community and Anarchy by Mary Glen Fredrick is a highly theatrical romp in a futuristic world where "paying the rent" is truly worse than hell.